Some called him Juanmi, others Guti.  Juanmi Gutiérrez was the heart and soul of Zazpi T’erdi. He came up with our name and his films were the first to be produced by Zazpi T’erdi. An insatiable film buff, a generous filmmaker, everyone could see that. Wearing a cap, holding a hiking stick in his hand and a camera to his eye, observing the reality around him.

In 2019 Juanmi left us, his last film unfinished. As Rosalía de Castro, whom he loved so much, said,
“Sad is the singing we sing,
but what if there’s no better one”.

Fortunately, Juanmi left us his filmography, with his voice and his vision. Through his films we will remember him and we will also have the privilege to learn more about the world.

All his films can be seen here: juanmigutierrez.org 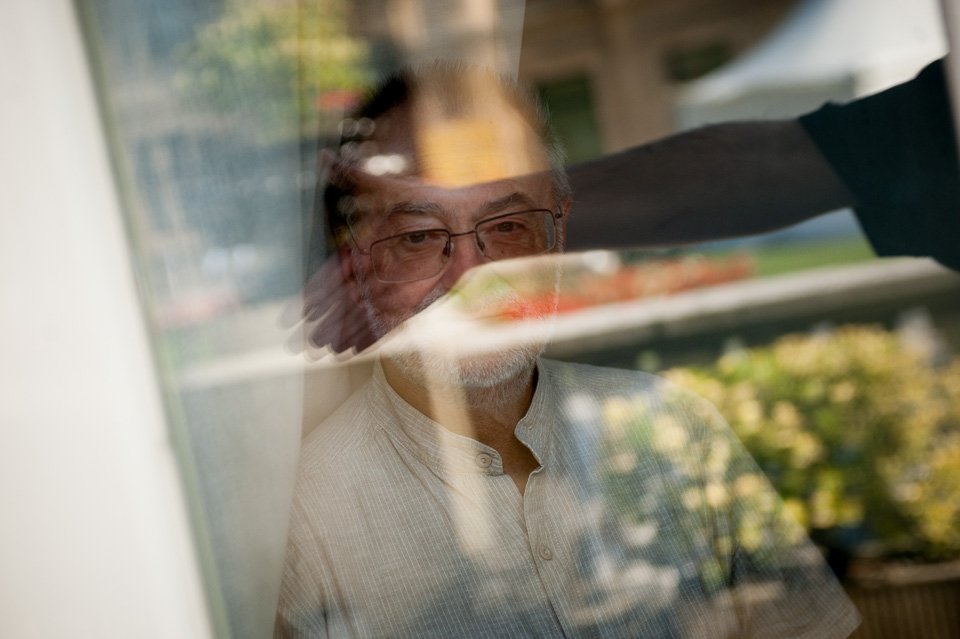 Juanmi Gutiérrez’s film career began in the 1970s, along with other contemporary Basque filmmakers who worked in 8 mm. He previously studied film at the INSAAS film school in Brussels. During the 70’s and 80’s he directed several short films and documentaries, among them are “Viudas de vivos e mortos”, “Itxoiten”, “Arrano beltza”, “Xalbador, gaztain kormutsa”, and “Balantzatxoa”. At that time he worked as a broadcaster at Herri Irratia radio station and soon began working in the HABE service of the Basque Government, creating audiovisual material for teaching in Basque. He also participated in the IKUSKA initiative with the documentary “Euskaldunberriak”. With the emergence of digital cinema, he set aside analog cameras and moved to directing documentaries, always accompanied by his wife Kany Peñalba. Right up to his death he was prolific documentalist, turning out a film almost every year. Some of his most renowned films are “Tabula rasa” (Clean slate), “Bozes lexanas” (Lexan Voices), “Isiltasun kalea” (Silence Street), “Angor”(Angor), “La plaza de la música” (The Muisc Square), “Ateak zabalduz” (Opening the doors) and “Paseko txoriak” (Passing birds). He also wrote and took part in research programs about the history of Basque cinema, such as “Haritzaren negua: Ama lur y el País Vasco de los años 60” (Winter in the oak: Mother earth and the Basque Country of the 60s), “Sombras en la caverna: el tempo vasco en el cine” (Shadows in the cavern: the Basque tempo in the cinema), “Mirando la vida que pasa” (Watching life go by), “Cocinar de cine” (Cinema cooking) y “Desde la frontera: el cine de Fernando Larruquert” (From the border: Fernando Larruquert’s cinema).

“In the history of Basque cinema, there will very few people like Juan Miguel Gutiérrez: who staying true to themselves, have laid their path, step by step, in what is known as the seventh art. He has been in the profession for 40 years without creating noise or fuss, steadily carrying out his work with conviction. If there is one thing that characterises Gutiérrez’s work, it is the humanism that has sculpted the Renterian’s personality from a young age ”.
Josemari Vélez de Mendizabal

Juanmi, detective of the impossible:
through his eyes he didn’t restrict seeing,
through his gaze one entered into life,
lived in it.
Juanmi, detective of everyday utopia
which means to live
to be people.
I remember his voice, I hear it,
asking questions along the way, listening in turn,
helping me see through his way of seeing
remembering with passion what others, crossed by time, have forgotten.
I never knew how, but his way of looking at others
always made me see myself,
find Ithaca on my skin,
like a gift that, even when opened,
never ceases to amaze me:
Thank you, Juanmi.
For teaching me to listen to what I see,
for teaching me to see others
a self portrait.